Easter throughout the world is a celebratory time – and that’s not any different in Germany, Austria and Switzerland. Of course, painting ‘ostereier’ (Easter eggs) and eating lots of chocolate is as part of Easter in these countries as anywhere else. But have you heard of Germany lighting fires or decorating trees in honour of Easter. We explore the top ten peculiar Easter traditions across the DACH region.

This year, the Easter weekend falls on the weekend around Sunday, 12 April. People everywhere are expected to be enjoying the long Easter weekend and the correlating school holidays through spending time with their families, going on relaxing vacations and experiencing nature to its fullest. After all, by Easter weekend it can already be quite warm, with flowers blooming in full. What could be better than experiencing the year’s first sun rays in a lovely biergarten with a glass of tasty local beer? And if you prefer your trees covered in eggs, going to see an Easter bonfire or perhaps visiting an egg museum, Germany, Austria and Switzerland have got you covered. 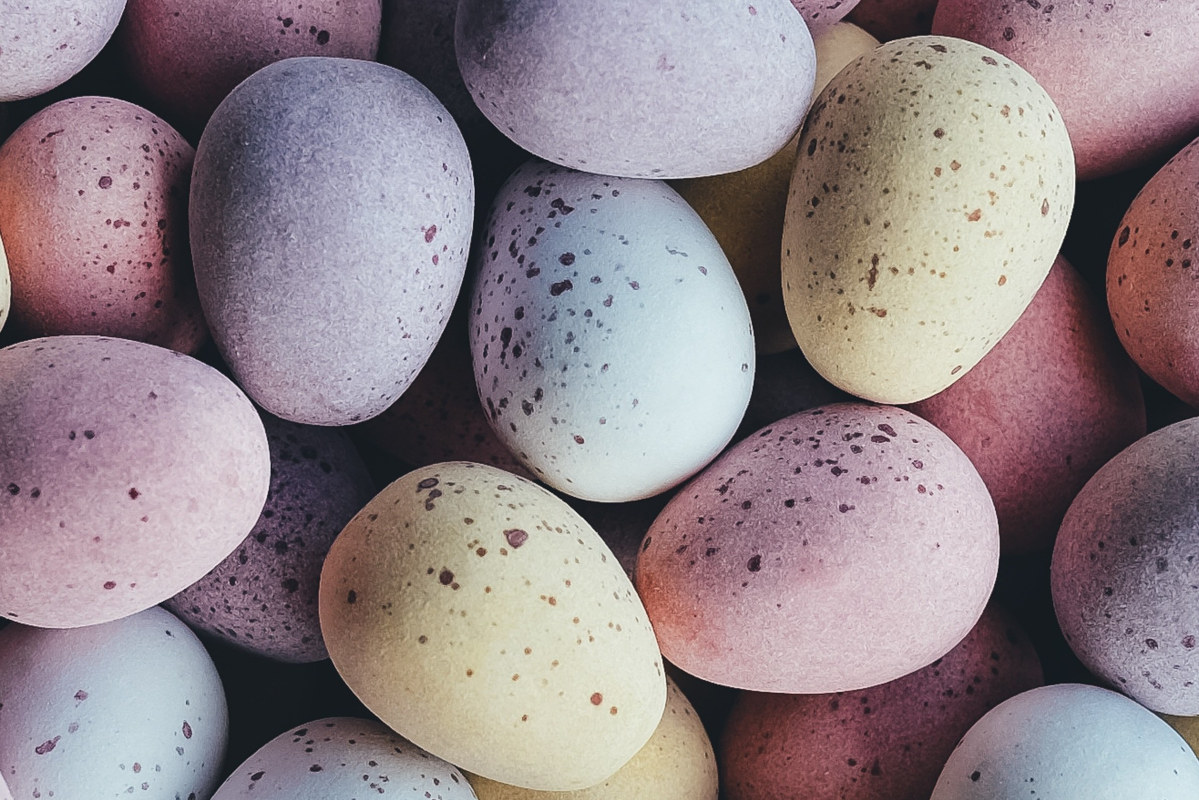 When coming across one of the ever-popular ‘Osterbrunnen’, you’ll know that Easter is upon us. They’re usually displayed from early April onwards and can best be described as colourfully decorated fountains on public squares. They’re a great sight not to be missed and can be found across Southern Germany, where more Catholic areas can generally be found. The most famous of these fountains is in Bavaria’s Bieberbach. The iconic fountain has won numerous Guinness World records for its great decoration – no wonder, then, that the small village gets over 30,000 tourists around Easter, annually. There are even entire German tours dedicated to visiting this very attraction.

These large public bonfires are held in cities and villages across the country to welcome the spring and are usually a meeting place for young and old alike. Expect a huge amount of alcoholic beverages, tasty foodstuffs like ‘bratwurst’ and a fun evening warming up at the huge fires. And prepare for the hangover the next morning. 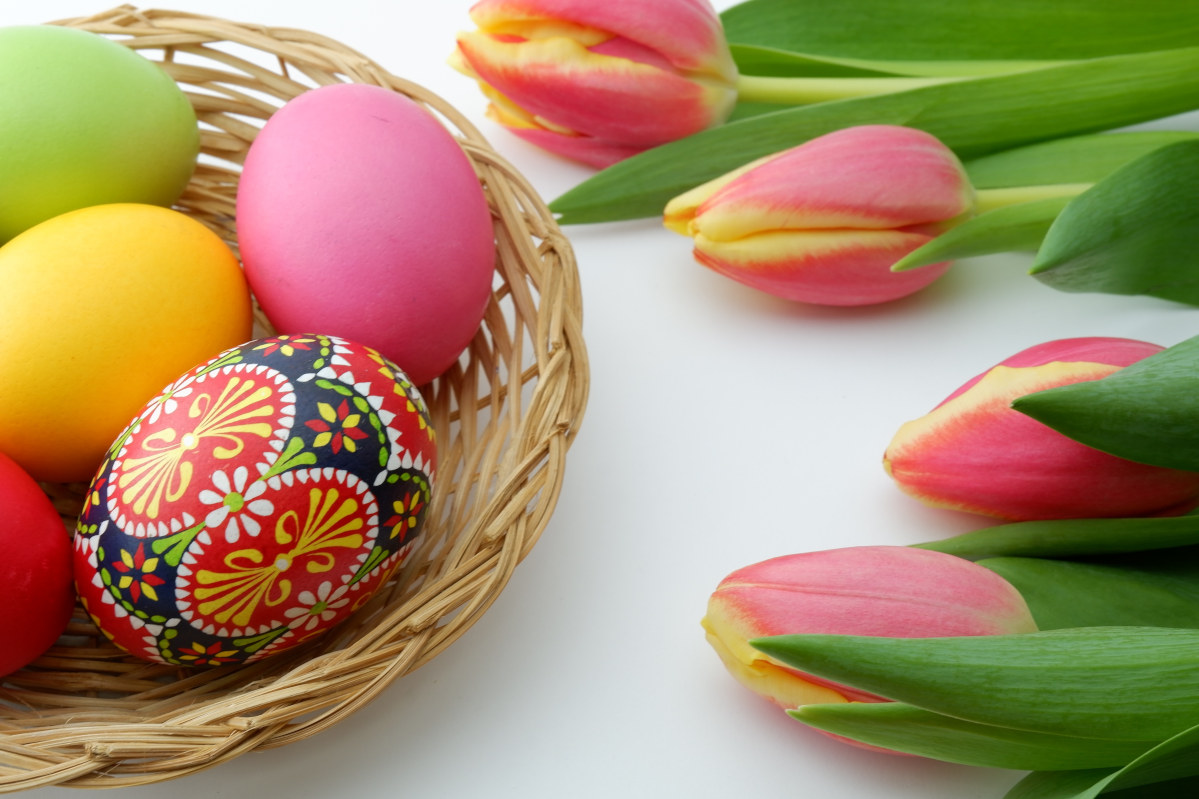 One of Austria’s more curious Easter traditions is the ‘Eierpecken’, which describes a fun Easter egg battle during the Easter breakfast or brunch. While coloured hard-boiled eggs are served alongside a cake in the shape of a lamb, a battle ensues. Each player holds their egg with the tip pointing up and prepares for the battle. Then, the first player starts hitting another egg tip with his own egg with the goal of breaking the shell of the other egg. The winner then proceeds around the table and tries his luck with other players. The winner is the person that is left with an intact egg at then end. Sounds quite a bit of frivolous fun with the family, right?

A different Easter custom in Austria that has almost disappeared over the years is egg scratching. This is basically an old, special scratch technique with which to decorate eggs via some beautiful patterns and ornaments. This almost forgotten custom is originally a Slavonic Easter tradition but it has been kept alive in Austria’s Stinatz by ‘Burgenland Croats’ and their descendants, after the Second World War. 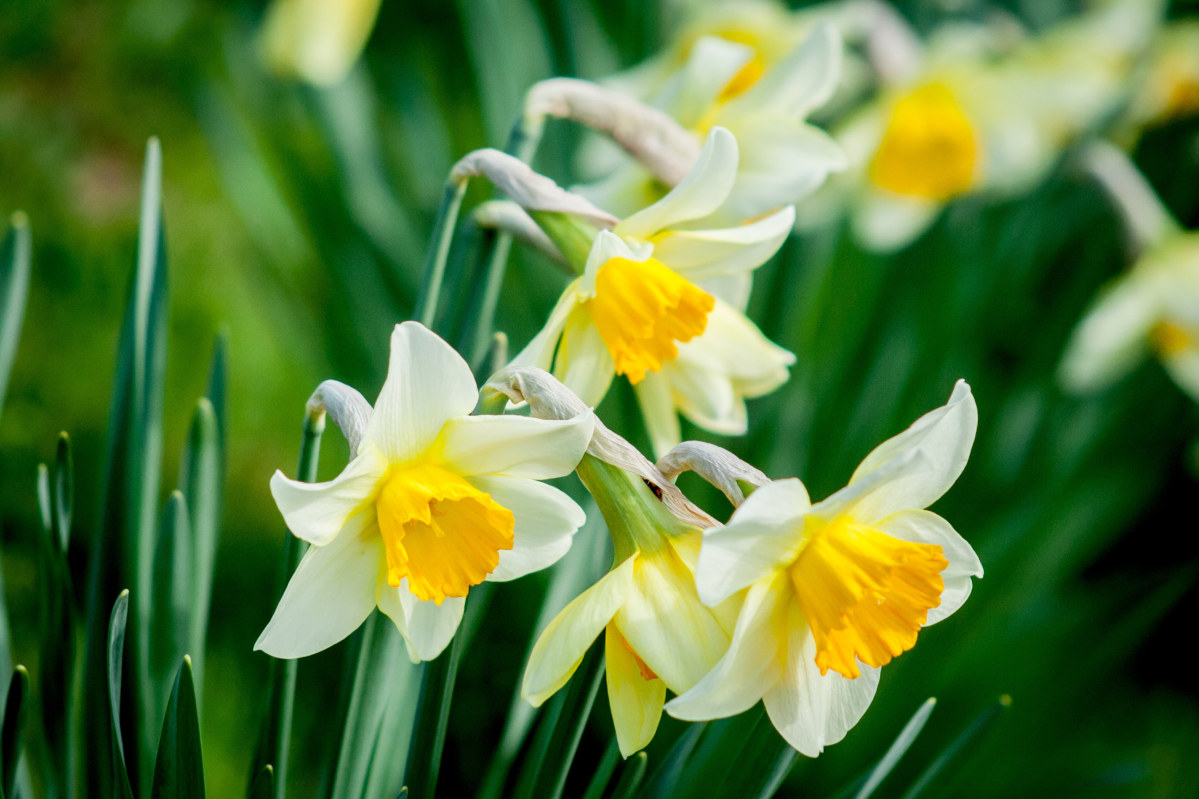 In Switzerland, on the other hand, you can find ‘Chlefeli’ all over the country around Easter. The term can be translated as two small wooden boards which can be hung on both sides of the middle finger. When shaken, they make a distinct, rhythmical sound which can be heard everywhere in the villages of Brunnen and Schwyz from Ash Wednesday to Good Friday. The instrument may actually originate from Spain, or in the Middle Ages, when lepers and others that could not communicate so well were required to announce themselves.

Switzerland has yet another fun Easter custom on offer: the Easter Monday Blue-Egg-Swim in Lake Greifensee. As the title suggests, families and individuals go Easter egg hunting in the lake on Easter Monday in temperatures between five and 15 degrees Celsius. How does it work exactly? Participants will swim around 20 metres to the diving platform, before getting out of the water, grabbing the egg and returning it safely to shore. The crowd will cheer you on and other rewards are egg soup, other tasty broths and much more! If you are interested in joining, just turn up on the day, as there is no need to register. 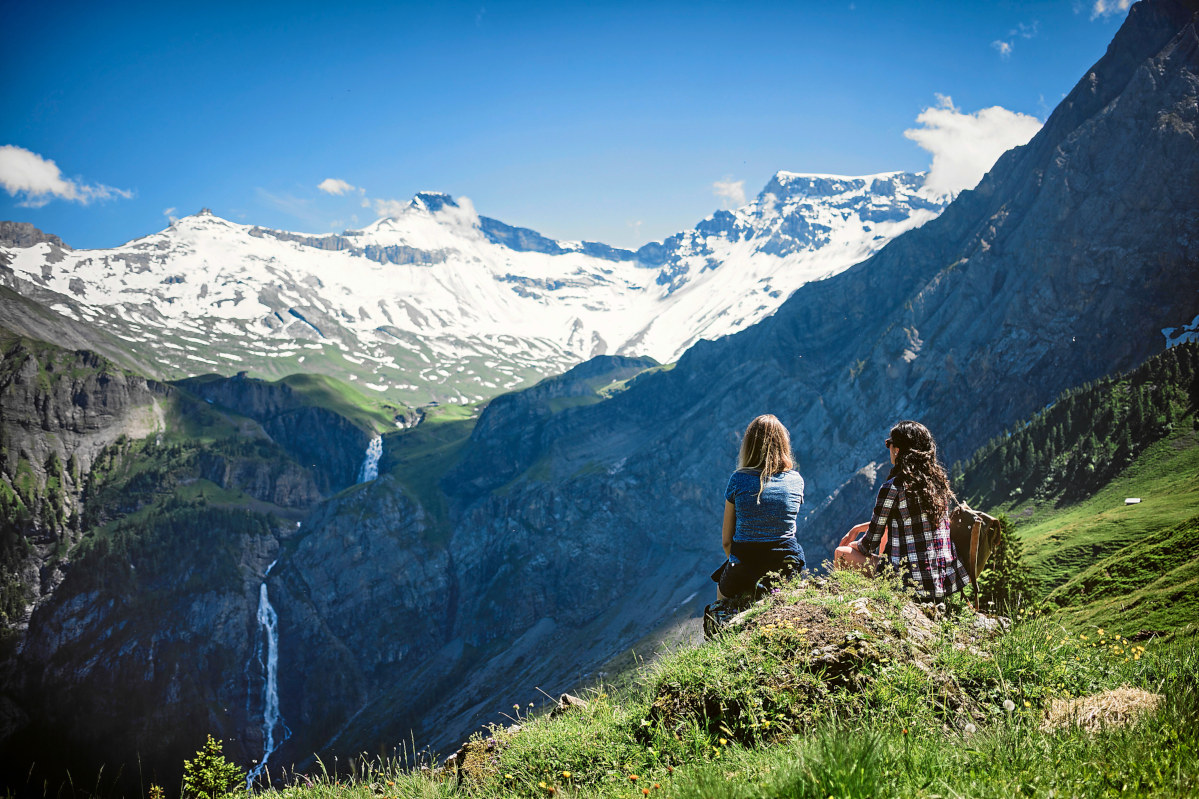 7) Easter egg trees all around

One of the big German Easter traditions is definitely the Easter egg tree. Sounds weird? Well, it simply relates to colourful trees and bushes that have been decorated with Easter eggs. You can normally find them throughout gardens all over the country, and there are also a few famous ones that are proper tourist magnets. One example of this is the Saalfelder Ostereierbaum in Thuringia’s Saalfeld.

In many Tirolean communities throughout Austria, Palm Sunday is celebrated with traditional processions that are well worth a visit. The procession in Imst is especially popular, where the young men parade through the village with the so-called ‘palm branches’ that are decorated with colourful ribbons, pretzels and branches. The branches can be an incredible 30 metres long and when they are being carried through the streets, it is a rather awesome sight. 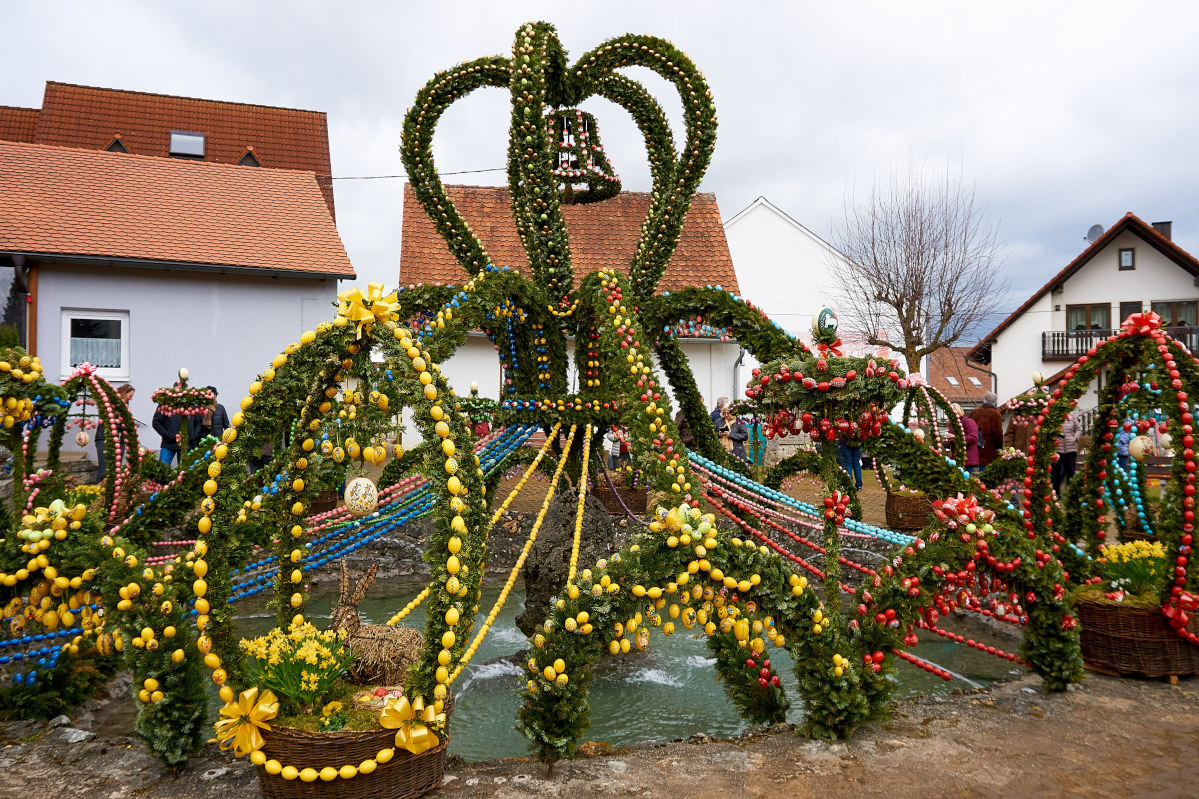 Why are the DACH countries of Germany, Austria and Switzerland especially obsessed with the Easter bunny as the primary Easter symbol? One theory says that the obsession with the hare started as it was a companion of a Germanic spring goddess called Ostara. Either way – while British kids prefer to indulge in chocolate eggs, children from the DACH region tend to find chocolate bunnies on their Easter brunch tables.

10) Stop dancing and enjoy some quiet

And, last but not least, let’s take a look at an omnipresent tradition throughout Germany. On Good Friday, ‘Karfreitag’ in German, traditionally no church bells are supposed to ring, no songs are sung and no music should be played, as this is the day Jesus was crucified. That’s why you can expect clubs to stop their music at midnight on Thursday, as it’s still illegal to dance on Good Friday. 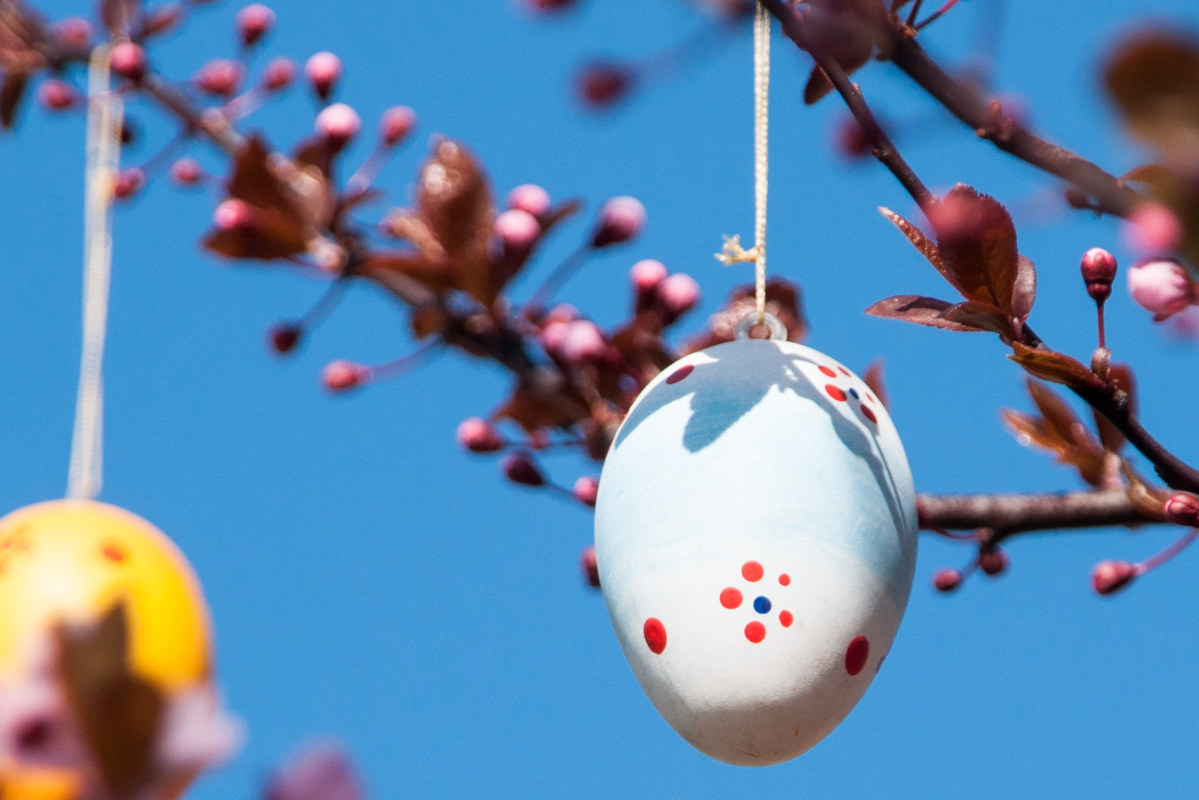