Stuttgart-based architecture studio VON M follows an integrated approach and convinces with interdisciplinary concepts, including not just classic construction but also interior design and communication. The studio’s creative mission is to bring together different specialisms to deliver a holistic visual experience that fulfils each project’s individual potential.

When VON M founder Matthias Siegert talks about his team and their principles there is a certain poetry to it. “We are like a visual orchestra,” he explains. “Our team consists of architects and interior designers, but also an architectural historian, who covers historic context. Like an orchestra, all the sub-disciplines build the whole piece when they come together, and our clients bring yet another layer so that each result ‘sounds’ a little different.”

The expertly realised concepts might differ, but the high quality and clear and concise design language delivered by the team remains consistent.

THE FUTURE IS MADE OF WOOD

It should come as no surprise that VON M has been recognised numerous times by the design industry for its outstanding contributions. Most recently they have been awarded the prestigious German Architecture Prize 2021 for Hotel Bauhofstrasse in Ludwigsburg. VON M’s design covered all aspects from construction to furniture, and as always, future-oriented sustainability exists at its core.

With wood being its featured material, the result is a beautiful minimalistic and CO2-neutral building that was created using a modular construction system. “Thanks to this wooden modular system a range of rooms were built entirely off-site in Austria and later installed in the building,” Siegert adds.

Another project that received multiple awards (including the German Architecture Award 2017) is a kindergarten in Ludwigsburg. Here, the VON M team showcased their expertise when it comes to working with wood, but (in contrast to the hotel concept) the prefabricated wooden elements were this time assembled during the construction process on-site. Working with wood is a specialism of VON M, as Siegert points out. “At the moment we are building a school for 600 students with an entire wooden supporting structure. Then there is a community hall as well as a four-storey office building made of wood, where we will also design a bespoke furniture system. For private investors we are developing wood-centric residential buildings, which is very exciting.”

Another core area of expertise at VON M is restoration. The firm is a proud recipient of the acclaimed Nike Prize (affectionately called the ‘Oscar of Architecture’) awarded by the Association of German Architects. VON M won it for the restoration and extension of the museum at Luther’s last residence (‘Luthers Sterbehaus’), a UNESCO World Heritage Site. “One of the challenges of historic buildings are the smaller room layouts,” Siegert explains. “Extensions are needed for larger event halls and to create barrier- free museum spaces.”

The third pillar of VON M’s success is interior design, and the team currently focuses on offices, which Siegert sees as a field in motion. “Covid has changed office life,” he says. “Now that we’re allowed back, it’s clear that offices are turning into a more social environment. We’ve also learned how important the physical workspace is for the bond between employee and company – seeing a little logo at the top of a laptop screen is simply not enough.”

Using their visual toolkit, VON M excels at creating atmospheres that bridge the gap between workplace and social environments – ready for a bright post-pandemic world.

WHAT THE FUTURE HOLDS

There are some exciting new projects in the pipeline, such as at the famous Heuneburg, where VON M will construct a museum space and design an engaging exhibition. “It’s a truly fascinating project,” Siegert says with a smile. “The hillfort of Heuneburg is considered the Celtic highlight of Germany, if not Europe.” 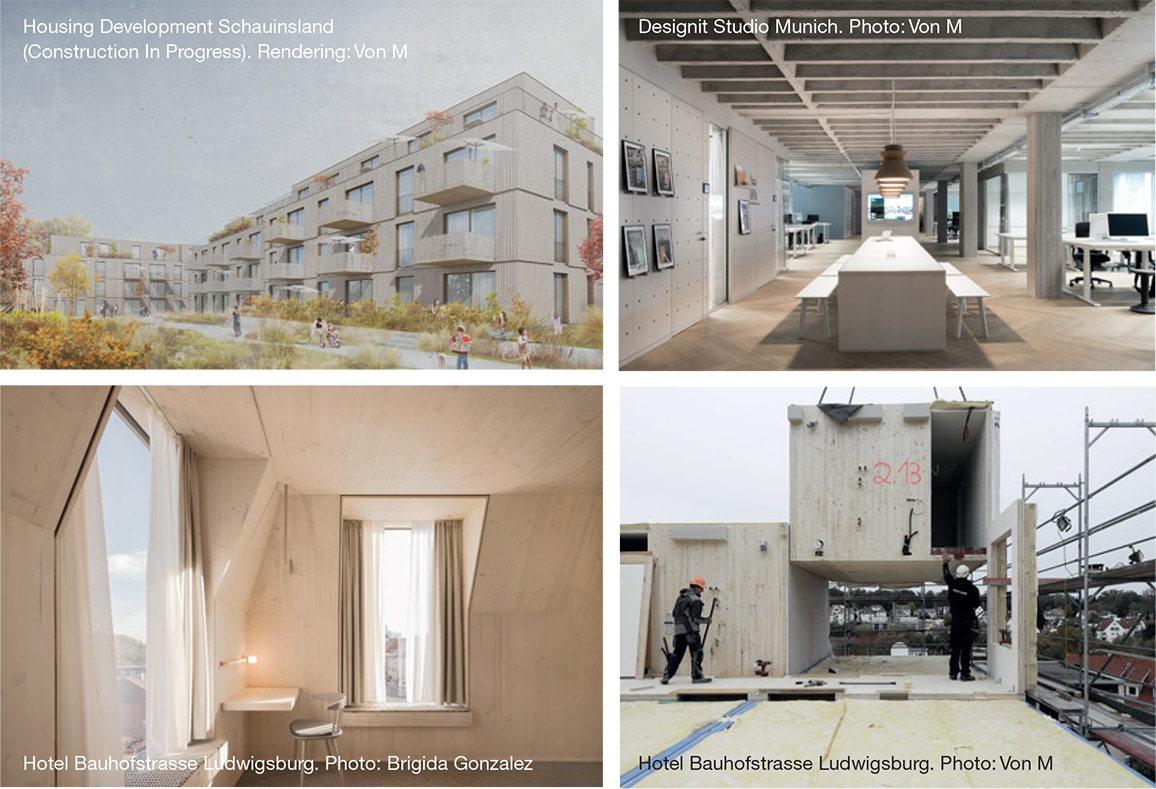 BOLLES+WILSON: ARCHITECTURE WITH A DISTINCTIVE CHARACTER AND RESPECT FOR EXISTING URBAN SPACES