IMMERSE YOURSELF IN MEDIEVAL TIMES

Wood shatters as the galloping knight’s lance clatters against the U-shaped shield protecting the left side of his mounted opponent’s armoured torso. Onlookers emit gasps and cheers. Almost as an afterthought, appreciative applause ripples through the crowd that’s sitting in the banked arena within the grounds of Kaltenberg Castle.

The loser of the joust momentarily jolts back in his saddle, somehow manages to absorb the impact and recover, then continues riding alongside the barrier that separates opponents. The victor raises his lance, pumps the blunted weapon in the air, and theatrically milks the crowd’s adoration. His face is hidden behind a metal helmet topped by a plume of black and yellow feathers, but it’s easy to imagine the elation.

The skill level of the costume-wearing stunt riders who participate in the Kaltenberg Knights’ Tournament is truly impressive. We’ve already witnessed a rider dressed in a black costume, much like those worn long-ago by members of the secretive Order of Assassins, stand on the saddle of a galloping horse. With his mount’s hooves kicking up chunks of the arena’s all-weather surface, he maintained poise, balance and control of the horse. Seemingly impossibly, he leant sideways, parallel to the ground. Still at full tilt, he sat down, twisted around and rode facing backwards. The crowd roared approvingly.

The 2022 edition of the tournament, known locally as the Kaltenberg Ritterturnier, takes place over the last three weekends of July. Like so many of the world’s normally annual mass participation events, the Kaltenberg Knights’ Tournament was last held in 2019. That year was the 40th anniversary of Prince Luitpold of Bavaria first inviting medieval reenactors and members of the public onto his castle’s grounds. In the four intervening decades, the scale and sheer level of spectacle of the tournament grew prodigiously.

Prince Luitpold is a member of the House of Wittelsbach. Between 1180 and 1918 his forebears ruled over Bavaria. By the time his ancestor Ludwig IV was elected as the Holy Roman Emperor, in 1328, tournaments had become a way for knights to demonstrate their martial prowess and win honour in a controlled environment. We can only speculate what the tournament organisers of the Middle Ages might make of Kaltenberg’s pyrotechnics and narration over a booming sound system.

They may have been familiar with the entertainment provided by the jesters and musicians who perform on five stages around the medieval-style village and in the procession that meanders between stalls. At those 150 stalls, artisans demonstrate skills similar to those practised centuries ago in European workshops. That includes jewellers crafting precious metals, potters shaping clay and a blacksmith hammering at an anvil. Their handcrafted wares are offered for sale.

So too, are food and drink. Kaltenberg Castle is the headquarters of the König Ludwig brewery and beer is brewed onsite. It was under the rule of Bavaria’s Duke Wilhelm IV, Prince Luitpold’s ancestor, that the world’s first nationwide beer purity law came into effect. Germany’s modern beer regulations are based on the Bavarian Reinheitsgebot of 1516. Locally brewed beer is served at the castle’s Ritterschwemme restaurant even on dates that the Kaltenberg Knights’ Tournament does not take place. 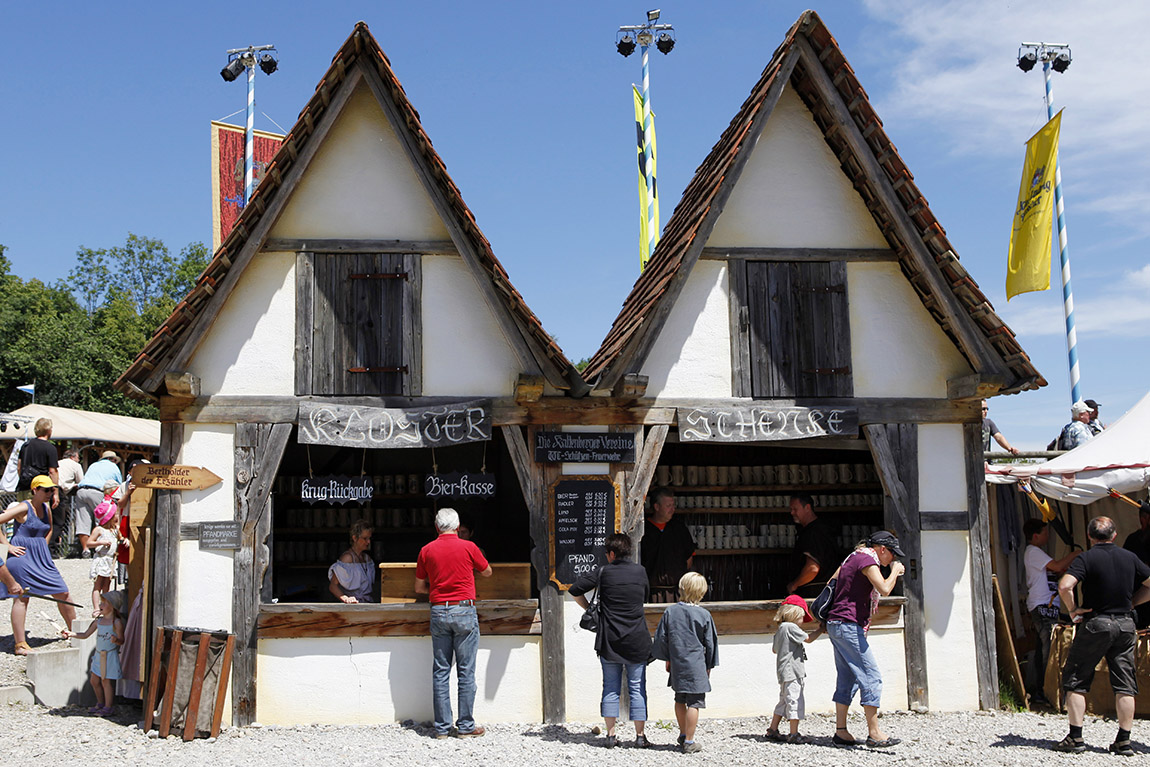 Refreshments being served at medieval-style stalls at the village at Kaltenberg’s castle grounds.

The castle is a five-minute bus or taxi ride northwest of Geltendorf, the western terminus of the S-4 suburban railway line that runs through Munich on its way to Ebersberg. The S-Bahn ride from central Munich takes 44 minutes.

According to Tripadvisor, visiting ‘Schloss Kaltenberg’ is the number one thing to do in Geltendorf. Perhaps surprisingly, it’s the only attraction listed.

Keen skateboarders may question that and point to the grey concrete surface and contoured wooden ramps and jumps of Geltendorf’s skatepark. Anyone who appreciates quirkier landmarks might argue it’s unfair not to list the tiny chapel on the municipality’s northern edge. The compact place of worship was erected following an outbreak of plague in the 17th century.

The pub in the heart of Geltendorf, the Alter Wirt, serves both Bavarian and Croatian cuisine. Its beer garden is ideal for relaxing with a cold beverage on warm days.

On a sultry summer day back in 1946 – the afternoon of 28 July, to be precise – the local weather turned. Like scenes from some unimaginative horror movie, dark clouds converged over Geltendorf. They brought lashing rain, hail and howling wind. A ferocious whirlwind whipped and swirled against the brickwork of the clocktower on St Stephan’s church. It ripped away the distinctive double bulge of the onion dome and dumped it in the priest’s garden.

Culturally engaged visitors may wish to view the ornate interior of the restored Baroque church.

As the tourism and hospitality industries recover, hopefully this year’s summer weather will remain kind so that people visiting Kaltenberg Castle are able to appreciate the tournament that counts among the world’s leading celebrations of medieval life. 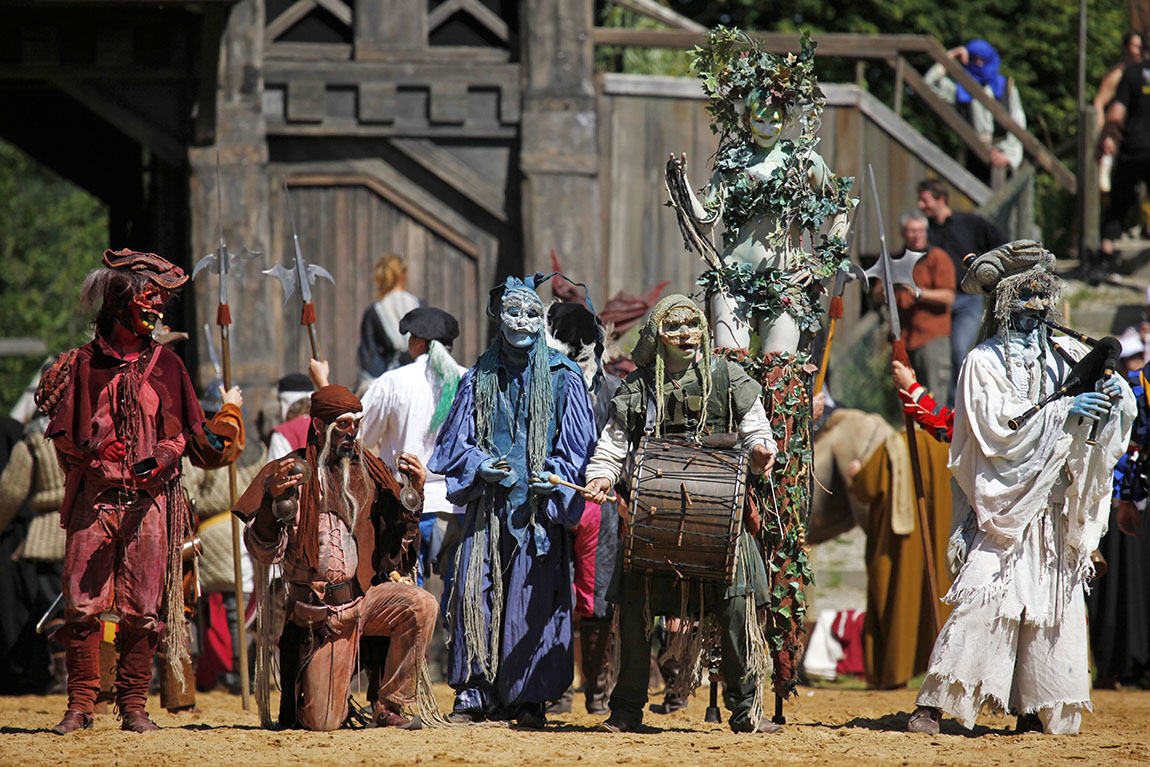 Jesters and musicians in the arena at Kaltenberg.

Pre-booked tickets are priced between €29.95 and €74.95 for the 2022 Kaltenberg Knights’ Tournament (ritterturnier.de). The opening evening, on Friday 15 July, termed the Gauklernacht, meaning ‘Jesters’ Night’, is the only of the nine dates of this year’s event which does not feature a tournament show in the arena.

WESTSIDE – A DESTINATION FOR SPONTANEOUS ADVENTURES

OZEANEUM Stralsund: A LOVE DECLARATION TO OUR OCEANS’ UNDERWATER WORLD