28-year-old German acting talent David Kross first shot to international fame as the teenage lover of Kate Winslet’s character Hanna Schmitz in The Reader (2008). In his latest film, Trautmann, he portrays Bert Trautmann (1923 – 2013) – a German goalkeeper who first came to England as a prisoner of war, but later on became one of England’s greatest football heroes of all time. In his interview with Discover Germany, David speaks about the physical challenges of playing a world-class goalkeeper, the emotional upheaval that came with the role of Trautmann, and what he likes about film-inspired travel.

Prior to shooting Trautmann, David had never heard of the goalkeeper Bert Trautmann, who was born in the North German city of Bremen, joined the German army during World War II and then came to England as a prisoner of war. However, David quickly saw this role as a great opportunity to make one of his childhood dreams become a reality. “When I was little, I always wanted to become either a footballer or an actor,” he recalls. “With this film, I finally got to do both.”

In addition to the physical challenge of playing a footballer, David was also touched by the true story of Bert Trautmann, who transformed from a German war enemy in the 1940s to one of England’s most beloved footballers in the 1950s.

“He was originally discovered to play for a small local club called St Helens Town,” David explains. “But when he was transferred to Manchester City, 20,000 people went to the streets to protest against him. They just couldn’t understand that so soon after the war, a German was asked to play for an English team. But Trautmann just stayed calm and carried on until the English eventually liked him. He also became a sort of peace ambassador and proved that sometimes good team spirit can be more powerful than any political forces.” 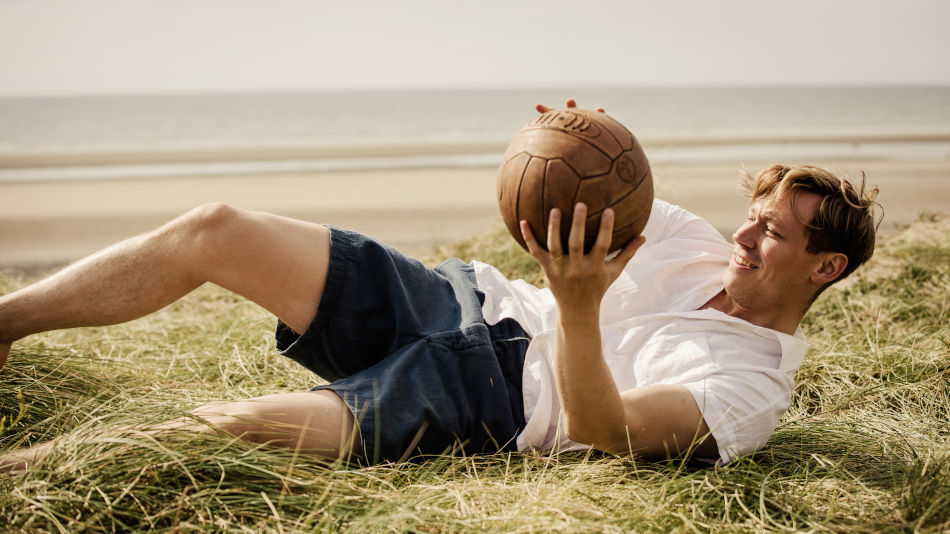 To prepare for the football scenes, David watched and studied all the football videos of Trautmann available on YouTube. There is, for example, the famous scene in which Trautmann breaks his neck in the 1956 cup final, but carries on regardless until he eventually wins the cup with his team, Manchester City. “It is pretty intense to watch that video while knowing what had just happened to him,” says the actor. “Trautmann’s commitment to the team was of course quite remarkable and surely contributed to the fact that he became such a legend in England.”

In order to prepare for his part, David also had to undergo physical goalkeeper training. “I used to play football myself from when I was five years old, but I usually played right midfield and never in the goalkeeper position,” he says. “As soon as my acting career took off, I gave up sports completely. So in preparation for Trautmann, I had to start from scratch four months prior to filming. That kind of physical work was very demanding and quite new to me. But I was up for the challenge and really wanted to play those football scenes as accurately as possible. In the end, the physical training really helped me get into character.”

In addition to the football scenes, there is also a blossoming love story. Both in real life and in the film, Bert Trautmann fell in love with Margaret – the daughter of his first football coach at St Helens Town. In the film, she is portrayed by Scottish actress Freya Mavor (The White Queen). Although Margaret initially despises Trautmann because he is a German, the two grow closer over time and eventually get married. 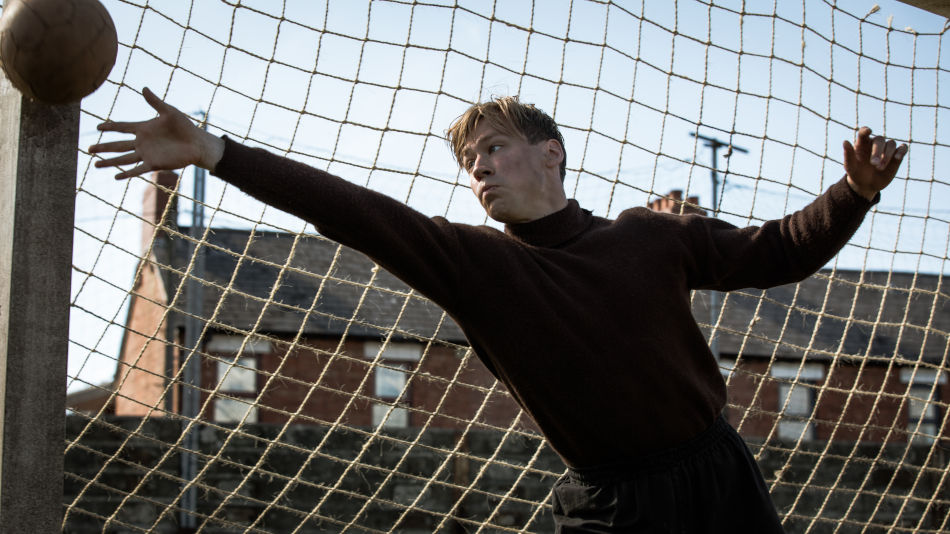 Thus, David feels that there were two sides of telling Trautmann’s story. “On one side, there was the physical challenge of playing one of the best goalkeepers the world has ever seen,” he says. “On the other side, there was this range of emotions with all those feelings of guilt and forgiveness. This is told through the love story between Bert and Margaret and the personal tragedies they then have to endure in their private lives.”

David, who has starred in several English-speaking films in the past, also took great care to get the language right. “We filmed the original version in English,” he says. “At the beginning, Trautmann still has a very heavy German accent, but as the film continues, he increasingly adapts to his surroundings and the Lancashire accent that is spoken in Manchester. In real life, he eventually spoke a mix of a German accent and a Lancashire accent. This little detail also tells a story in itself and was therefore quite important for the film.”

Unfortunately, David Kross missed out on ever meeting the real Bert Trautmann, who passed away after suffering two heart attacks in 2013. Trautmann director Marcus H. Rosenmüller, however, had met Trautmann for an interview in 2010 and incorporated many of the personal memories and stories that Bert Trautmann had told him, into the final film.

Filming in Belfast and Bavaria

Most of the film locations for Trautmann can be found around the city of Belfast in Northern Ireland. After filming was completed there, the crew moved on to Bavaria, Germany, where the huge Wembley Cup final scene was recreated in the Rosenaustadion in Augsburg. The grocery shop scenes were filmed in the Glockenbachviertel in Munich, which turned out to be the perfect film set for a small, family-led grocery store in the 1950s.

While filming in Northern Ireland, David also saw some of the film locations from hit TV series Game of Thrones. He recalls: “The production crew pointed out some Game of Thrones filming locations to us. I think it’s pretty cool to see the places that you have previously seen on screen.” 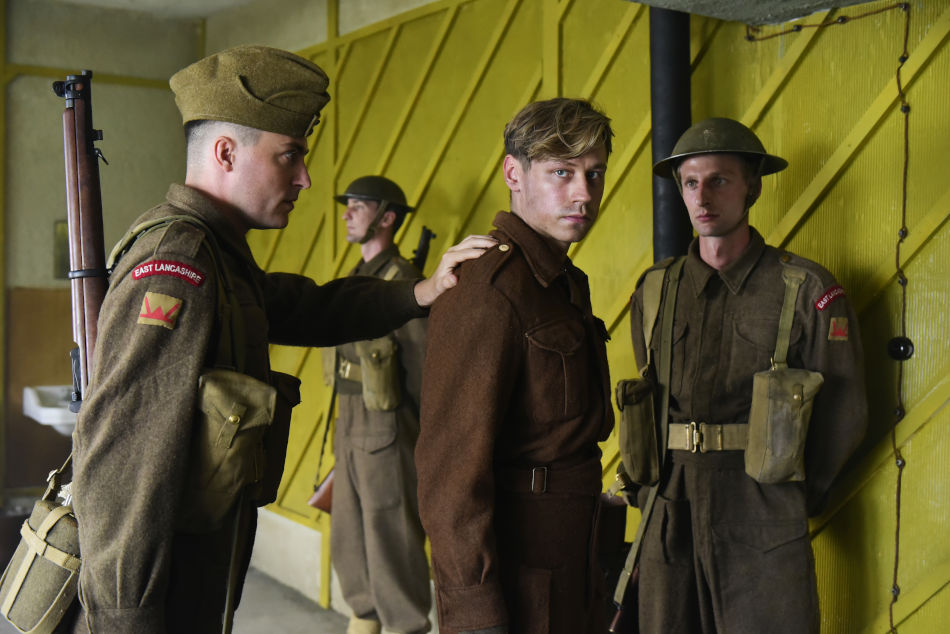 Aside from discovering different places and countries while shooting a film, David also enjoys personal travel as a way to unwind after a few busy weeks of shooting. “After we finished Trautmann, I went on a surfing trip to Portugal for two weeks,” he reveals. “Surfing and getting rinsed by the ocean was a perfect way to completely unwind from the previous project and then make a fresh start on the next one.”

He adds that this break was particularly important since there wasn’t much time between Trautmann and his next film project Ballon. In the German thriller based on a true story, David plays a father of two who attempts to flee the GDR with his family in a self-stitched hot-air-balloon in the 1980s.

After filming this project in Thuringia, Germany, David travelled to Costa Rica, which he chose “because of the beautiful nature and beaches”.

David, who is originally from a small town near Hamburg, now calls the buzzing German capital Berlin his home. Here, he is looking forward to his next football match with friends. “Normally I don’t play football anymore,” he says, and smiles: “But the next time I’m having a match with my friends, I will definitely be the goalkeeper. After all, I have had plenty of practise now.”

Trautmann is in cinemas now.