Something to put in your travel calendar this year: It‘s a woolly, bustling spectacle when around 500 sheep return to the Bettmeralp from their summer pasture on the top of the Swiss Aletsch Arena at the end of September. The animals look forward to the lush green meadows at lower altitudes, while guests and locals head to the festival that goes hand in hand with the so-called ‘Schafscheid’ cattle drive. And the farmers are once again happy to have their sheep in the dry…

“There it is, it‘s Rösli,” Beat Franzen calls out to his wife Marianne, who is standing on the festival lawn stirring a large pot of polenta. Rösli is one of Beat‘s favorite sheep who is returning home this afternoon together with around 500 other sheep. They are returning from their summer resort high above the 20-kilometre-long Aletsch Glacier. You can hear them jingling and bleating ‘Bah’ and ‘Mah’ excitedly from afar, until they finally shuffle in via the main road of the Bettmeralp, which fortunately is car-free anyway, and gallop down the embankment to the picturesque Maria zum Schnee chapel.

The magnificent view of the Matterhorn, Mischabel and Weisshorn does not seem to impress the sheep, as they have spent many weeks up at the most beautiful viewpoints in the Aletsch Arena, in the face of the longest and most imposing glacier of the Alps and a sea of proud mountains that reach up to 4,000 metres.

Marianne and Beat have now also spotted Berti and Alpenrose in the waving mass of wool – and almost lost sight of their lamb stew, lamb sausages and polenta. As trained cooks, the two take care of the physical well-being at the annual Schafscheid, as the spectacle of the Almabtrieb is called here. Because of course it has to be celebrated that the animals are back safely. With sheep farmers, it is to be expected that lamb specialties will be served alongside Valais raclette. This is served with a cool Johannisberg or Pinot Noir, and all of this is topped off with some great live music. 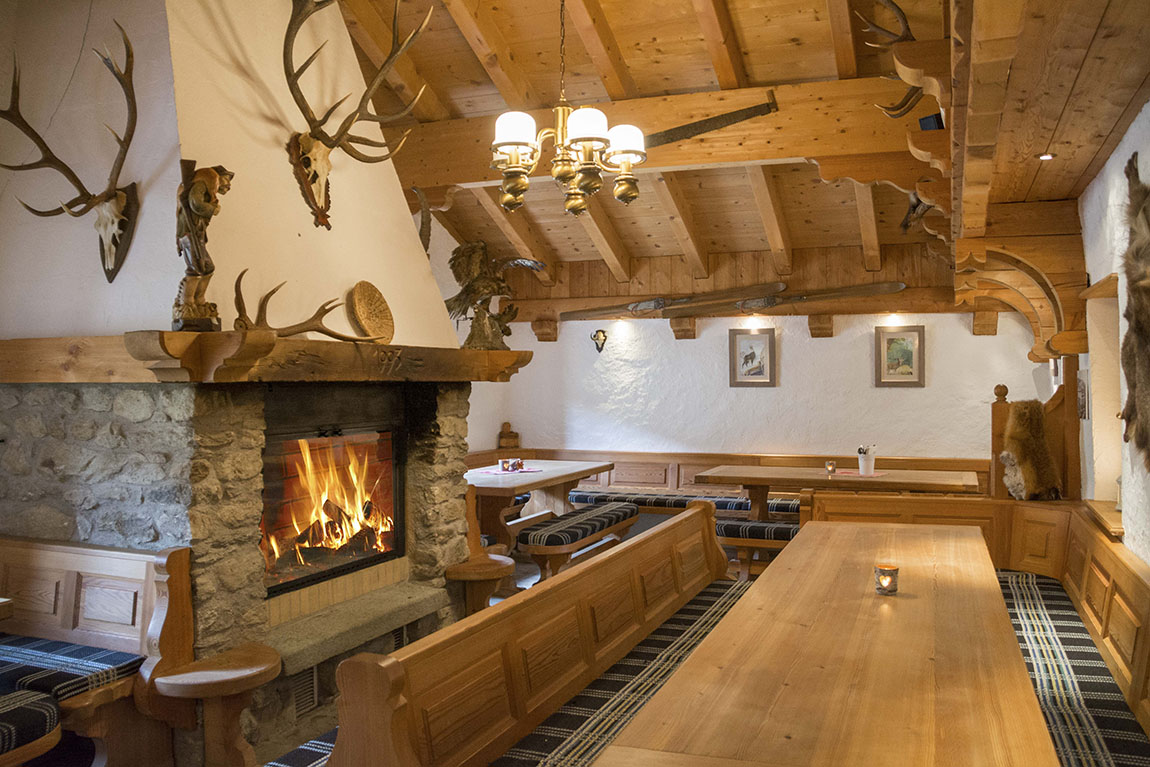 While a few holiday guests stick very close to the food stand so as not to get in the way of the exuberant animals, Beat raves about his black-nosed sheep – an old Upper Valais breed of sheep that is becoming increasingly popular. Because they are hard-working and yet frugal landscapers, they have a sure footing even in impassable terrain, prefer cold to warm and show a particularly friendly nature. Their popularity may also be down to the fact that they just look incredibly nice, with their black faces, ears and boots, over which thick white wool grows. Beat will be presenting the most beautiful animals at the autumn shows in the region over the next few weeks. Blacknose sheep aren‘t just livestock raised for the meat, they‘re a passion.

Among connoisseurs of the field, they are considered the most beautiful breed of sheep. The helical or spiral horns, and their physique, are close to the ‘original sheep’. Keeping and breeding them has a major impact on the Valais landscape, as the animals prevent cultural landscapes from becoming bushy. They help to preserve the mountain meadows and thus biodiversity.

The meat also sells very well: “The black-nosed sheep is a special treat and is also enjoyed by people who don’t usually eat lamb. One of the reasons for this is that the animals find the best herbs at this altitude,” Marianne reveals. 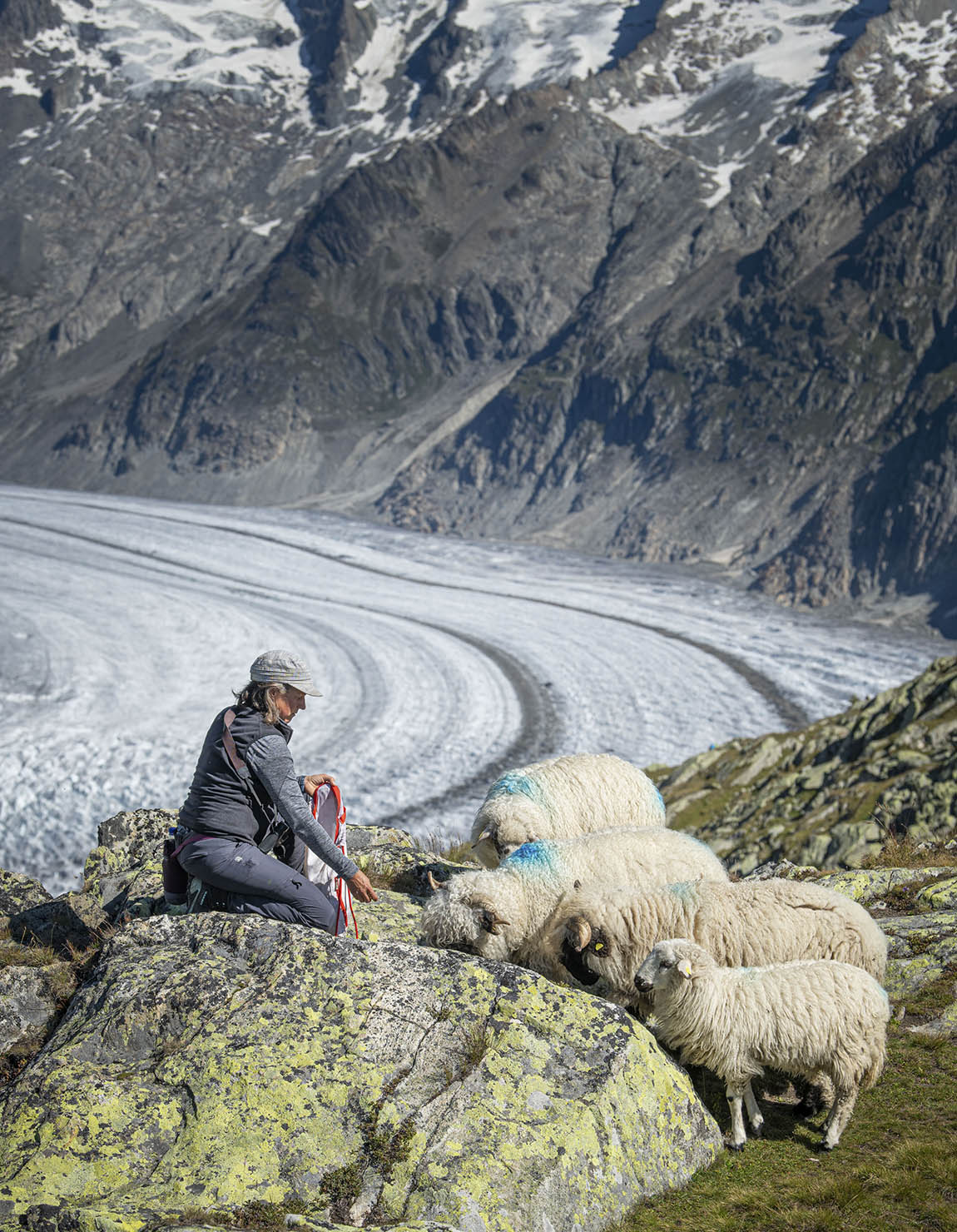 Beat also visits his animals about once a week during the summer. He doesn‘t really have to, because the shepherdess Anja takes care of the 500 to 600 sheep of the around ten farmers. But Beat likes to hike up to the ridge above the glacier and roam between Hohbalm, Roti Chumme and Märjelensee to check on his herd. “The group usually stays together,“ he explains, “they hardly mix with the others.” And so it‘s not difficult for him to recognise his animals. “If we whistle a bit, my brother Peter or I, then they come here too,” he says.

It is a lot of work for the shepherdess, who has to collect all the sheep entrusted to her at the end of the Alpine summer. “I’ve done that too, many years ago,” remembers Beat. “Back then, they renewed the gondola lift to the Bettmerhorn – and nobody wanted the job without gondolas,” he says and laughs. “Together with my brother and our colleague Urs, we spent a good week in the area until we had all the herds together again. And it was snowing up there.” 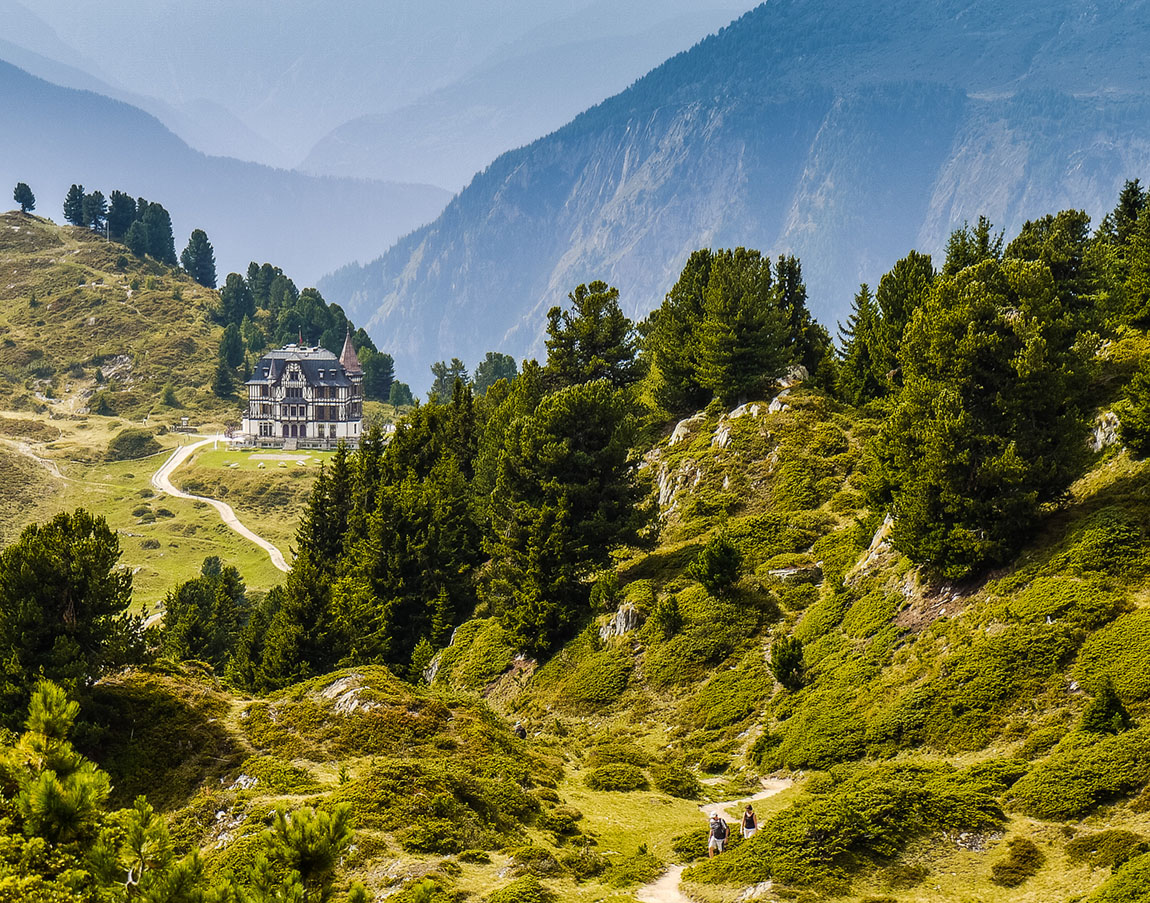 The joy is all the greater when everyone is back safely at the end, the sheep farmers talk shop with their colleagues over an aperitif and the holiday guests are offered a real, rustic village festival.

However, the actual sheep separation is still to come, because in the evening, when raclette, lamb specialties and polenta have been eaten, only the people go home. The sheep stay together for the last night, outside in the pasture around the chapel. It is not until the next morning that each sheep farmer selects his animals from the large, woolly crowd – and Beat goes home with Rösli, Berti, Alpenrose and the others.

Usually held at the end of September, the ‘Schafscheid’ is a great incentive to explore the surrounding area. In the Swiss Alps Jungfrau-Aletsch UNESCO World Heritage Site, the car-free mountain villages of Riederalp, Bettmeralp and Fiescheralp are enthroned on the sun-drenched high plateau of the Aletsch Arena. In the near vicinity, you can also explore the most impressive, longest ice flow in the Alps, and 40 high mountains.

GOURMET EXPERIENCES IN THE SNOW