A Christmas stroll through Salzburg

Towards the end of November, the arrival of Advent marks the beginning of the Christmas season in Salzburg. A stroll through Salzburg during this time is a truly memorable experience.

The festively decked-out city is even more radiant than usual, while the smell of hot chestnuts, mulled wine and delicious cookies wafts through the lanes of the Old Town. Aside from markets, music and folk traditions, visitors will experience the ever-popular Nativity scenes and, of course, filming locations from The Sound of Music.

But while the film is shown around the world, particularly around Christmas, most Austrians don’t have any idea what Julie Andrews’ favorite things are. In fact, it wasn’t until 2002 that the film premiered on national television. On the one hand, Austrians are bemused by the cultural cinematic curiosities, such as schnitzel with noodles, when the traditional accompaniment is potatoes; on the other, only 20 years after the war, Hollywood memories of the Nazi period were uncomfortable. Instead, Salzburgers prefer to think of their city as the city of Mozart. 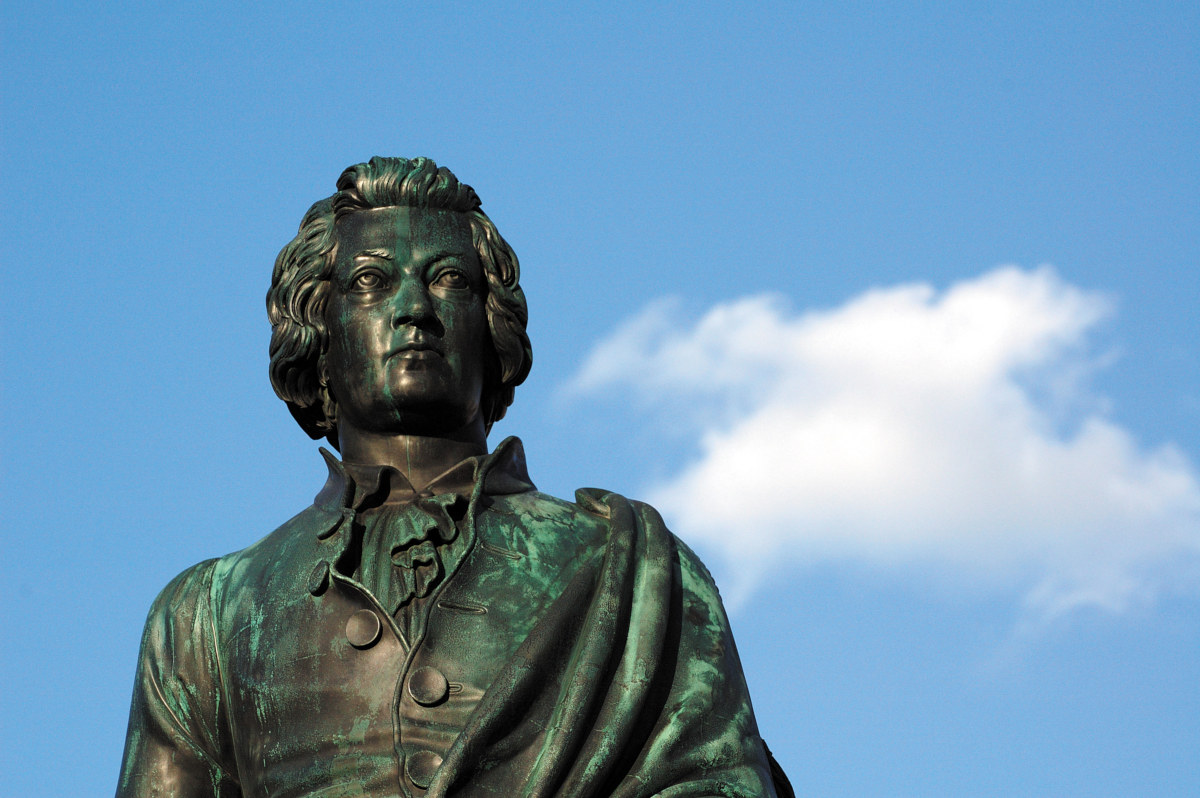 In the footsteps of Mozart

The legacy of one of the world’s greatest composers is noticeable everywhere. There is the statue in the historical district, the annual Mozart Week and the Mozartkugel. While the golden chocolate balls have been exported around the world, the original ones are actually wrapped in silver foil and can be bought as Christmas gifts where Paul Fürst invented them in 1890 – at Café Konditorei Fürst.

Wolfgang Amadeus Mozart was born in Getreidegasse 9, where the family lived for 26 years, on 27 January 1756. The third-floor apartment was by all standards middle-class with four rooms and a kitchen. Mozart himself spent a considerable amount of time away from the family home as his father Leopold took him around Europe to showcase his musical talent at the most important courts of the nobility. Today, Mozart’s birthplace, with its distinctive yellow façade, houses a museum. 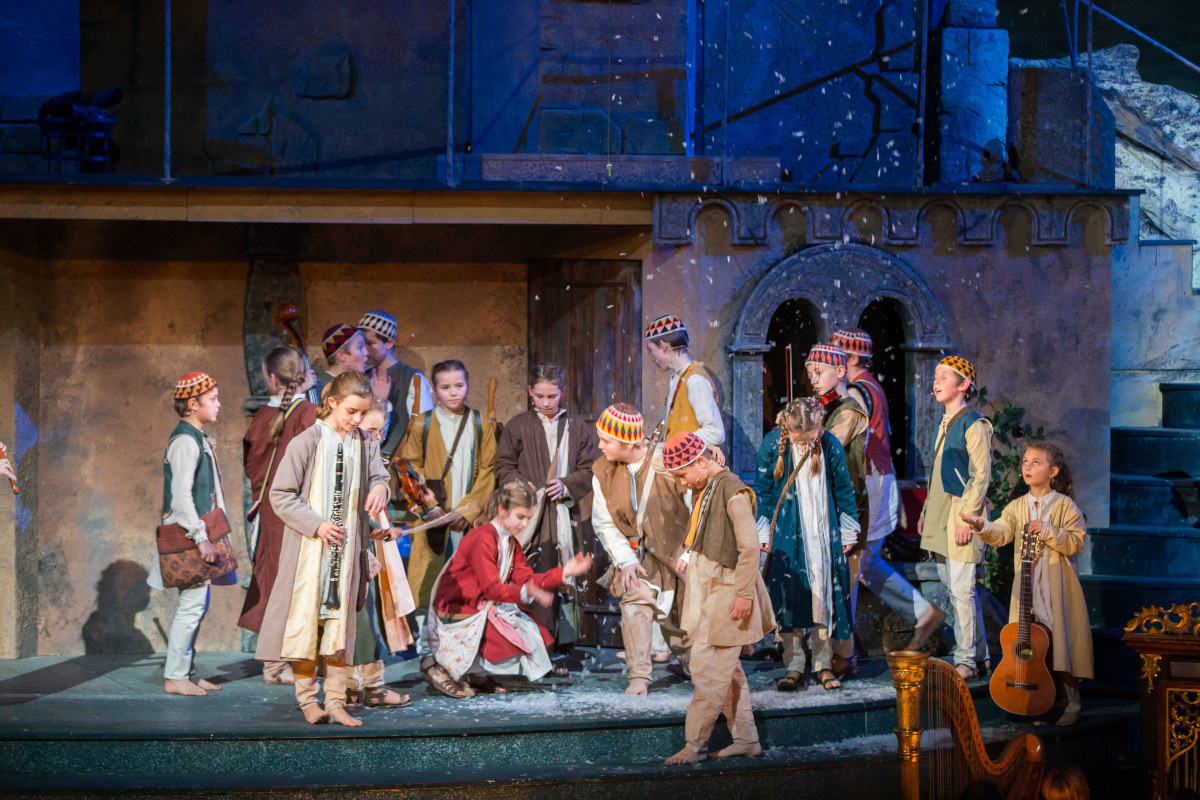 High above the city

Salzburg’s Old Town, burrowed below steep hills, looks much like it did when Mozart lived here over 250 years ago. The views of the spires of 27 churches, the fast flowing Salzach River and the snow-covered mountains can be best enjoyed from the towering Fortress Hohensalzburg, one of the biggest in Europe. The aptly named Fortress Advent (26 November – 19 December 2021) is held high over the city in the inner courtyard. Local arts and craftsmanship, delicious Christmas goodies and music performed by small ensembles of wind musicians and choirs have been drawing visitors for over 20 years.

It’s tempting to spend half a day here with the Marionette Museum being a special visitors’ favorite but there is much more to explore, such as the cemetery of St Peter’s Monastery. Local doctors, lawyers and nobility, as well as composer Michael Haydn, brother of Joseph, Mozart’s sister Nannerl, and Paul Fürst of the chocolate fame – the latter watched over by skull-bearing cherubs – are buried here. The cemetery is also home to the catacombs – cave-like chapels and crypts hewn out of the Mönchsberg cliff face – and the oldest grave is from 833 AD. 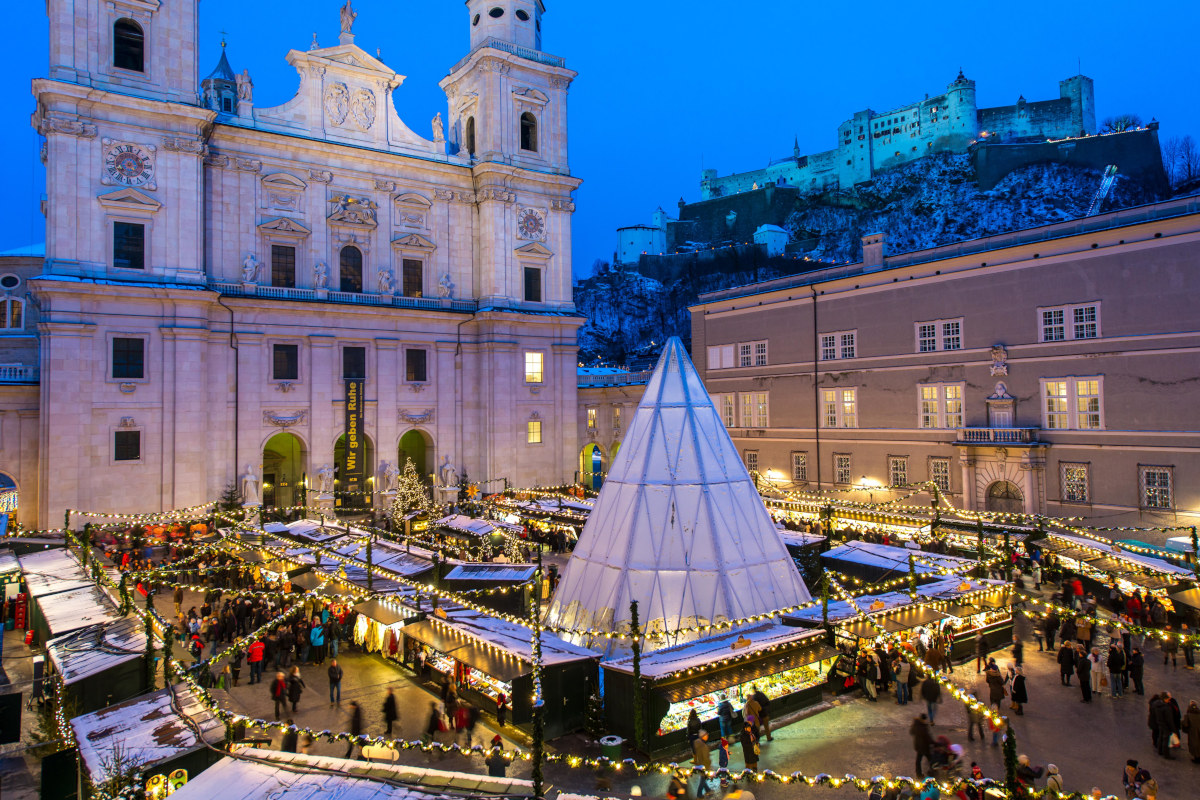 Only a few minutes’ walk further is the Salzburger Christkindlmarkt (18 November – 26 December 2021), mentioned as far back as the 15th century, which is held around the venerable cathedral, a masterpiece of Baroque art with a bulbous copper dome. The traditional huts and unique atmosphere, along with specially designed lighting that stretches above the market stands like twinkling stars across the night sky, makes this Christmas market a favourite with locals, too.

From the cathedral, the festive atmosphere continues through the romantic Goldgasse, where lots of jewellery and craft shops are located, across the Salzach River, and finally into Mirabell Gardens, famed as a film set from The Sound of Music. In recent years, the Christmas market in front of Mirabell Palace (18 November – 24 December 2021) has developed into a magnet for young and old. It’s also worth walking around the adjoining Zwergerlgarten (Dwarf Garden), the oldest in Europe, founded around 1695.

If time allows, a trip to Castle Hellbrunn, about five kilometres outside of Salzburg, shouldn’t be missed. This summer palace is famous for its exotic fauna, citrus trees and trick fountains which are quite unparalleled in the world today. Over Christmas, the Hellbrunn Advent Magic charms its many visitors. Over 700 conifers are decorated with 10,000 red Christmas balls and strands of lights, immersing the entire area in a festive glow. On the façade of the palace itself, the 24 windows are transformed into an oversized Advent calendar.